Hello, I’m here to ask about solving a problem regarding the annotation function in the context of using a tablet and pen as input.

I’m using a Wacom Intuos M that’s connected to my PC through wire USB input. Simply, when I go to write or draw --especially in a horizontal direction-- Kami will try to interpret my drawing as scrolling (as in: I draw a line downwards on my tablet, and Kami will interpret this as scrolling upwards. As if touch scrolling was enabled, but for my pen. Its worth noting that touch scrolling does not automatically enable when I use my tablet and pen to annotate) while also registering the “click” function of my pen making contact on my tablet and inerpreting that as continuing the line being drawn.

The result is that as Kami attempts to scroll upwards, the annotations will negate that activity of my pen and only registers jittery increments of movement.

Below are some tests of what this looks like: 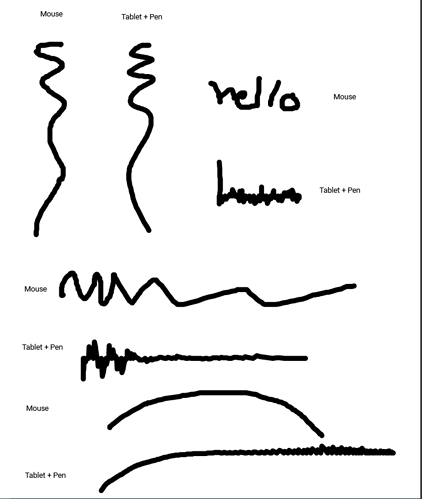 (I have a screen recording of tests similar to in the above so its clearer what I mean by simultaneously interpreted scrolling and drawing, but there’s not a way to embed video files into these board posts, as far as I could see)

I’ve troubleshooted on the tablet end by turning on and off Windows Ink in my tablet configurations, but this issue doesn’t improve. If I set the zoom all the way to 100 (so there is no scrolling) then the tablet works as smoothly as normal – but since I use Kami to take notes, that’s not a practical solution since I’ll need to be able to zoom in to fill in notes and do my scratch work.